“Our drilling, the first ever at depth below the Bayonne mine, has confirmed that good gold grades and viable vein widths continue at depth below the historic mine workings. In addition, we’ve successfully intersected the Maggie Aikens vein below the point where our high-grade surface samples were collected, and confirmed gold values at depth within this vein,” stated Margaux’s President and CEO, Tyler Rice. 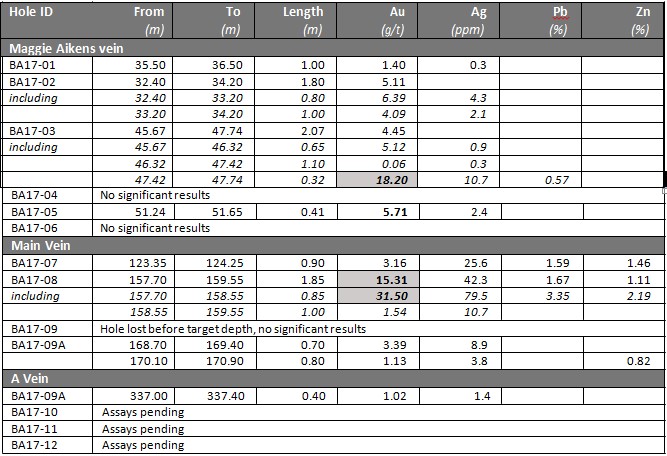 Six holes were drilled at the Maggie Aikens vein in the eastern part of the Bayonne property, to follow-up high grade gold from surface grab samples collected during the Company’s summer work program (51.6, 46.6 and 41.4 g/t Au, see Margaux’s press release dated September 18, 2017 for full results). Margaux’s 2017 drilling represents the first-ever drilling on the Maggie Aikens target. Drilling confirmed that veining continues to depth below the surface pits where the high grade gold samples were collected. Results from drilling included up to 18.2 g/t Au over 0.32 m, within a broader interval that averaged 4.45 g/t Au over 2.07 m. The Maggie Aikens is a near-vertical vein, which remains open on-strike to the southwest, as well as to depth.

The remaining seven drill holes were drilled at the historic Bayonne Mine, 3 kilometres to the west of Maggie Aikens, to test the steeply dipping Bayonne Main and ‘A’ veins below the limit of historic mining. Historical production from the Bayonne mine (mainly from the period 1936 to 1942) totaled approximately 82,000 tonnes, at an average grade of 16 g/t gold (1). There has been minimal exploration at the site since mining ceased.

All of the 2017 holes at the Bayonne Mine, reported to date, intersected veining with the exception of BA17-09, which was lost before the target depth was reached. The best result to date from the 2017 drilling is 15.31 g/t gold over 1.85 m, from a vertical depth of 135 m from surface and approximately 20 m below the limit of historic mining on the Main vein.

Results are pending for the final 3 drill holes of the Bayonne drill program (BA17-10 to BA17-12) that targeted the Bayonne ‘A’ vein.  The Bayonne ‘A’ vein has been identified by the Company as an undeveloped auriferous splay vein to the Bayonne Main vein (see Margaux’s press release dated August 1, 2017 for further details). Diamond drilling for gold on Margaux’s Sheep Creek property is also now underway with results expected in November.

Results reported in this release are drill core samples. After logging, intervals marked for sampling were sawn along the core length, with half of the core placed in bags for sampling and the remaining half core piece returned to the box for reference.  Samples were shipped to ActLabs’ Kamloops, B.C. laboratory (ISO 9001:2008, ISO 17025, CAN-P-1579 certification) for preparation and analysis. At the lab, samples were crushed to 80% passing a 10 mesh (2 mm) screen, then a 250 g split of the crushed sample was pulverized to 95% passing 105 microns. All samples were analysed for gold by FA/AA finish on a 30 g sample of pulverized material, and for a multi-element suite by ICP-MS following aqua regia digestion.   For samples returning > 5 g/t Au by FA/AA methods, gold was assayed by FA/gravimetric methods on a 30 g sample.  QA/QC procedures were implemented during the drilling program, including the insertion of analytical blanks and standards at regular intervals, as well as systematic duplicate sampling. Core size was NQ2.

Drill intersections are reported as down-hole length and not true width.  Additional work will be required to determine true widths.

Linda Caron, M.Sc., P.Eng, Margaux’s Vice President of Exploration, is the Company’s Qualified Person as defined by NI 43-101 who has reviewed and approved the technical information contained within this press release.

Margaux Resources Ltd. (TSX.V: MRL, OTCQB: MARFF) is a mineral acquisition and exploration Company focused on the development of zinc, gold and tungsten deposits in the Kootenay Arc, in the southeastern region of British Columbia. The Company is directed by a group of highly successful Canadian business executives and has a fast- growing portfolio of previously producing properties that include the Jersey-Emerald mine, which at one point was the 2nd largest historic zinc-lead mine in B.C. and the 2nd largest tungsten mine in North America.

This press release may contain forward looking statements including those describing Margaux's future plans and the expectations of management that a stated result or condition will occur. Any statement addressing future events or conditions necessarily involves inherent risk and uncertainty. Actual results can differ materially from those anticipated by management at the time of writing due to many factors, the majority of which are beyond the control of Margaux and its management. In particular, this news release contains forward-looking statements pertaining,  directly  or  indirectly,  to  the  following:  Margaux's  exploration  plans  and  work  commitments,  the potential of mineral resources and potential for recovery thereof, as well as other market conditions and economic factors, business and operations strategies. Readers are cautioned that the foregoing list of risk factors should not be construed as exhaustive. These statements speak only as of the date of this release or as of the date specified in the documents accompanying this release, as the case may be. The Company undertakes no obligation to publicly update or revise any forward-looking statements except as expressly required by applicable securities laws.

Margaux Resources Ltd.
Tyler Rice
President, CEO and a Director
(403) 537-5590
This email address is being protected from spambots. You need JavaScript enabled to view it.