Calgary, Alberta--(Newsfile Corp. - May 19, 2022) -  Cassiar Gold Corp. (TSXV: GLDC) (OTCQX: CGLCF) (the "Company" or "Cassiar Gold") is pleased to announce assay results for the remaining 13 drillholes completed at the Cassiar South project area as part of its 2021 diamond drill program at the Company's flagship Cassiar Gold Property located in British Columbia, Canada. The Cassiar South project area hosts a multitude of shear vein targets and several past-producing underground mines that have historically produced over 315,000 ounces of gold grading between 10 to 20 g/t Au[1].

"The Cassiar South project area hosts multiple unmined veins close to historical workings and the 2021 program successfully confirmed our understanding of the critical structures that control the distribution of gold mineralization with 18 out of 19 drillholes hitting quartz veins containing anomalous to high-grade gold," stated Marco Roque, President and CEO of Cassiar Gold. "We are thrilled to have expanded known gold mineralization along strike at the Bain vein, particularly given the fact that the area is covered by an existing mining lease and is close to our permitted 300 tpd mill and tailings facility. Success in defining new resources in upcoming campaigns will provide us the opportunity for a low-cost and near-term development opportunity."

"The Cassiar South project area remains one of the most fascinating and exciting aspects of the overall Cassiar Gold Property for its potential to host high-grade vein systems, which is complemented by our foundational and highly prospective bulk-tonnage Taurus deposit to the north. As such, we are keen to embark on our most ambitious exploration program to date with a 20,000 m drill campaign across the property that will begin in June."

The Cassiar South project area of the Cassiar Gold Property hosts a multitude of shear vein targets and several past-producing underground mines that have historically produced over 315,000 ounces of gold grading between 10 to 20 g/t Au. Individual vein targets have been known to host between 30,000 to 60,000 ounces of gold, with some vein clusters containing up to 120,000 ounces as shown in historical production records for the Main Mine1. Past-producing high-grade veins such as the Vollaug vein are known to have strike lengths of up to 3 km.

The Company's 2021 drill program at Cassiar South consisted of 24 drill holes totaling 7,191 m of which 19 holes were completed (five holes were abandoned due to challenging drill conditions). The program targeted extensions of the Bain, Cusac, Vollaug, Bain-Cusac Bridge and Hot Vein veins (Figure 1 & 2). Results are summarized below. See Table 1 for full results highlights. 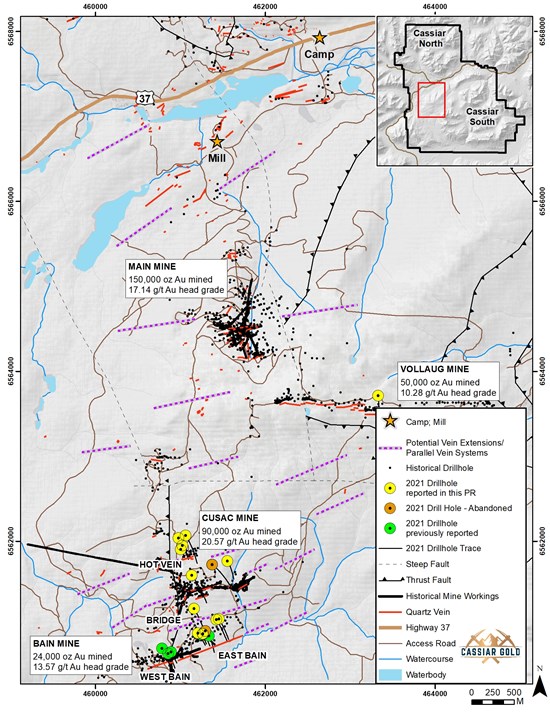 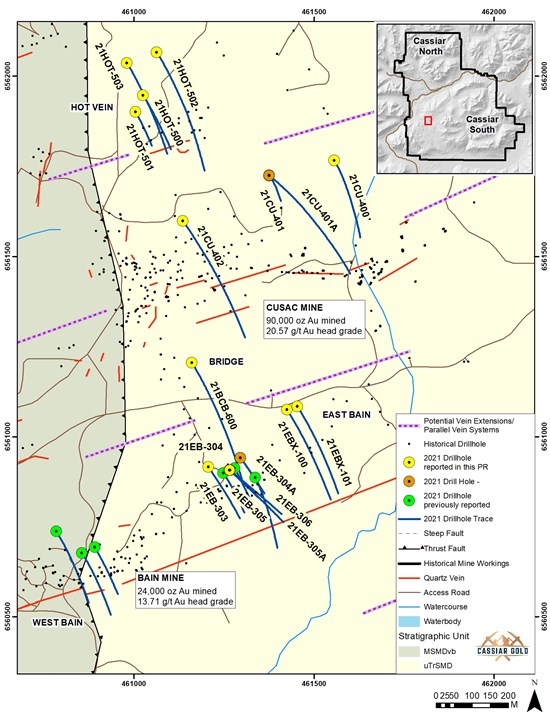 
The Bain vein system historically produced 24,000 ounces of gold at an average grade of 13.71 g/t Au from 1993 to 19951. Historical drilling by a previous operator in 2002, 2008 and 2009 in unmined areas returned a minimum grade of 10 g/t Au, demonstrating the continuation of the vein system to the east to form a 2 km long corridor of known high-grade mineralization. The area was subject to additional mine development in 2009 to within 50 m of the unmined East Bain vein, allowing for ease of potential future underground and mining access. Multiple significant historical intercepts occur in this area, as is illustrated in Table 2 and Figure 3.

In 2021, Cassiar Gold drilled a total of 14 drill holes at the Bain vein target (see Figure 2), 11 of which were drilled to completion (three holes were abandoned due to challenging drill conditions). These drill holes tested gaps in the known 2 km long mineralized corridor as well as extensions to it and affirmed continuity of mineralization. Results from the first six completed drillholes were disclosed in Cassiar Gold news on October 12, 2021, highlighted by intercepts of 4.8 m of 35.10 g/t Au in hole 21EB-300 and 6.4 m of 12.64 g/t Au in hole 21EB-301.

The remaining five holes disclosed in this release tested unmined portions of the Bain vein system and all holes successfully encountered gold-bearing quartz veins with anomalous or significant gold values. Of the five holes, notable highlights include: 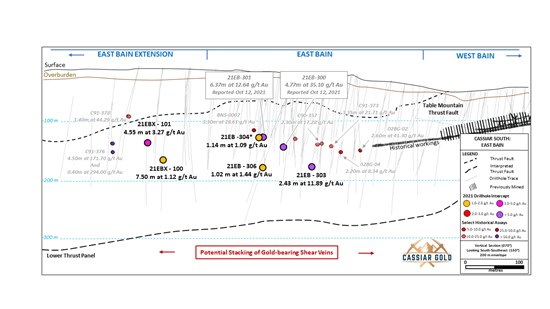 The Cusac vein system is composed of a series of vein segments that historically produced 90,000 ounces of gold at an average head grade of 20.57 g/t Au from 1986 to 19971. In 2021, the Company drilled four holes at the Cusac vein totaling 1,521 m to: (1) test the downdip extension of mineralization at past-producing vein segments, and (2) test the potential for parallel vein sets at the east, central, and west extents of the Cusac System. Two drillholes (21CU-401A and 21CU-402) were drilled to completion while two others were abandoned due to excessive deviation and poor drilling conditions before reaching target depth (21CU-400 and 21CU-401).

The Bain-Cusac Bridge ("Bridge") target represents a ~700 m long corridor between the gold-bearing Bain and Cusac vein systems that has been sparsely drilled by previous operators with historical drillholes only testing to shallow depths. The Company drilled one hole totaling 509 m in 2021 to test the potential for new blind veins parallel to the Bain and Cusac systems while acquiring new stratigraphic and structural data from oriented core to increase confidence in geological modeling where data is sparse.

The Hot Vein is a gold-bearing shear vein target that lies 400 m northwest and roughly parallel to the Cusac vein system in a stratigraphically favourable position near the mafic volcanic/argillite contact. Limited historical drilling at this target traces the vein to over a 150 m strike length and drill data is constrained to shallow depths.

In 2021, the Company drilled four holes totaling 1,298 m to test extensions of the vein system, continuity of favourable stratigraphic relationships, and the potential for stacking of additional vein-hosting thrust panels. All four drillholes (21HOT-500 to 21HOT-503) encountered gold-bearing quartz veins that confirmed the continuation of the shear structure up to 130 m downdip of historical drilling with narrow intercepts of anomalous to modest gold grades as set out below:

The Vollaug vein system historically produced 50,000 ounces of gold at an average head grade of 10.28 g/t Au from 1980 to 1997 1. The vein is up to 3 m wide, and occupies a nearly three-kilometre-long strike of the thrust fault at the shallow dipping argillite/listwanite contact.

In 2021, the Company drilled one hole totaling 254 m at the Vollaug vein to test the potential for steeply dipping gold-bearing shear veins propagating away from the thrust contact, similar to other historically mined veins. Drillhole 21VOL-700 was drilled into an area where historical drilling to the west suggested the presence of a thicker mafic volcanic horizon. Instead, the hole encountered 40 m of chert below the listwanite horizon. While no significant intercepts were returned from this drillhole, potential for stratigraphic stacking of favourable geology, as well as steeply dipping auriferous shear veins in mafic volcanics, at Vollaug remains and warrants further investigation.

The Company is in the final stages of preparation for its 2022 exploration season which will include a planned 20,000 m drill campaign. The drill campaign will be divided between the Cassiar North and Cassiar South project areas with the following anticipated drill breakdown:

At Cassiar North, potential extensions of key mineralized trends will be prioritized and drill tested to identify and extend higher-grade corridors within and emanating from the Taurus bulk-tonnage deposit.

At Cassiar South, extensive historical drilling and mining data has been used to identify and prioritize targets based upon potential for vertical stacking of favourable stratigraphy; periodicity of parallel sets of productive vein systems; and lateral and down-dip extensions of known vein systems to identify new corridors of veining of the style which have been historically mined.

The 2021 Cassiar drilling program comprised HQ drill core oriented using the REFLEX ACTIII system. Drill core samples selected and analyzed were logged and then cut in half using a diamond blade cutting saw, in a secure core processing and storage facility located in Jade City, British Columbia. Certified gold reference standards and blanks were routinely inserted into the sample stream as part of the Company's QA/QC program. All samples were delivered to the SGS Canada preparation facility in Whitehorse, Yukon, where they were processed, and then shipped to the SGS Canada analytical facility in Burnaby, British Columbia. Samples were analyzed for gold by 50-gram fire assay with finish by atomic absorption or gravimetric methods. Screen metallic analysis was performed on selected samples. SGS Canada quality systems and technical aspects conform to requirements of ISO/IEC Standard 17025 guidelines.

To view the source version of this press release, please visit https://www.newsfilecorp.com/release/124619